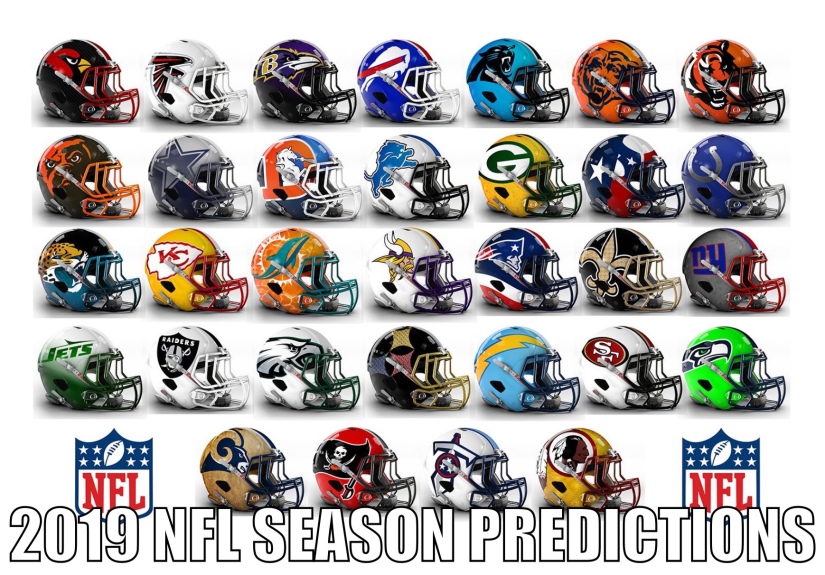 I was having withdrawals of the NFL, so I decided to look at the upcoming NFL season and made my predictions. I hate the Bears. Might be ridiculous, let me hear your feedback in the comments. Let’s get right into it!

The Cards had a good draft and if David Johnson is telling the truth about him being the best back in the league, then maybe this is a little low. I think they beat any team they are expected too, but lose to above average teams.

This one was tough. I like Matty Ice and the Falcons roster as a whole, but they need to prove that they can run the ball and build an offense around Julio Jones. Two good wins against Philly and Tennessee.

Lamar Jackson is now the full time starter, and Mark Ingram has a lot to prove as a full time starter. They lost a lot on defense, and they will have some things to prove going forward. They finish the season strong, trying to make a wild card birth to no avail.

Ed Oliver was a steal at nine. A player that should have gone into the top four and should be in Oakland, adds to an already great passing defense for the Bills. Plus, there are some rumblings that Robert Foster could be a number one, at least that’s what a certain biased Bills fan said.

Cam didn’t get any better weapons, if Carolina really thinks that the Panthers are gonna improve based off growth? You are insane. This is not their year. They buffed up their defense with Brian Burns, and also getting Greg Little was a solid pick up.

Is Tarik Cohen an every down back? Can Mitch take another step forward? Is Allen Robinson going to continue trending toward a number one receiver? I’m sure that their elite coaching staff will figure the offense out, but you lost your Defensive Coordinator too. Got some things to figure out.

Andy Dalton will take another step back, at least that’s my prediction. Just another receiver that Cincinnati will waste. One good win against Pittsburgh, and two expected against Oakland and New York (Jets).

I believe blindly in Freddy Kitchens, and his ability to bring OBJ and Juice together personality wise. Baker should continue to ride the high that was his rookie year. The defense improved, but we will see.

The Cowboys will improve if Zeke and Dak progress. If they do not, then it will be the 8-8 team that we all know and love. Tough losses against NO, GB and NE.

The Broncos are in a weird place. Having so much talent on defense, and being so much less on offense. It’s not gonna be a good year, get ready Broncos fans.

It’s funny, because I am a Packers fan and a of people will say that I am being wrongful to our NFC North foe. I just do not believe that the Lions are that strong. They could be 8-8, 10-6, but I’m sticking to my pick.

Rodgers is healthy. The Packers have added most of the necessary pieces that have been missing, especially in the linebacker core. McCarthy was a huge issue, and now that they have a younger coach that is in touch with the NFL’s new offense, this could be an exciting year for the green and gold.

A new GM, a rebuilt secondary and two shiny new offensive lineman. The rookies will have some growth to adapt into protecting Watson, but they will make or break whether the Texans have this season or not.

The Colts more than likely will not start off the season like they did last year. As a matter of fact, they should win nine out of their first eleven games. Also, Rock Ya Sin and Paris Campbell should be two key pieces in the Colts season.

Boy, what a difference a Super Bowl winning QB can make on your record. The defense is solid, and the offense should completely switch from stagnant to explosive. Juwaan Taylor and the steal that was Khalil Ma…. I mean Josh Allen will help this come true.

The defense definitely took a step back, but not an insane amount. They will not be the same team as last year because other teams will be prepared, but don’t expect the Chiefs to go anywhere.

LA is still as good, if not better talent wise than the Kansas City Chiefs. Thomas Davis is gonna be as huge as he can be, especially at his age. Rivers has the weapons, and Hunter Henry will be a welcomed addition from the IR.

Fresh off a Super Bowl, people are gonna think that I have something against the Rams. I don’t. The Rams won five games last year by points are less, I just think they get a little less lucky. They lose the first two at home, win a bunch and then have a rough end to the season.

Dan isn’t gonna like this. Rosen will be a huge upgrade over their many prior QB’s, but it won’t change year one. After a rough start to the year, I think they take five out of the last nine to end at this clip. Christian Wilkins may swing this.

Again, call me a hater. Sorry @AJ Dugstad. They buffed their line, but lost Sendejo, Sherels, and Richardson. The defense will take a small step back, but Kirk Cousins is still Kirk Cousins. Irv Smith Jr. isn’t gonna get the playing time he deserves with Randolph back.

I do not care how old Brady is, or if Gronk is gone, or if their only weapons are 3 Walmart greeters, they will be good. K’Neal Harris will be amazing.

This could be Drew Brees final year. It could also Sean Payton’s final year, so if NO is gonna win a title to end this amazing era, this is their last chance. They traded their first round pick, and didn’t exactly make a splash in free agency except signing their future QB.

They finally have some semblance of an offensive line, it only took losing most of their studded defense to do it. Daniel Jones isn’t gonna make that big of a splash this year, especially with limited weapons. If you wanna argue that Tate and Shepard are a winning tandem, I got a bridge to sell you. Their only wins are week five, when after losing four straight, they start Jones and he lights up his first start. They beat a sorry Detroit team, and their rival New Yorkers for a total of three wins.

The Jets have a history of spending big money on overrated free agents. I feel like that is their thing, ya know? Bell should be huge for Darnold, if he is even on the team when the season starts.

Rookies almost never change a team over night, and they picked up a negative energy on offense. I love Antonio Brown’s talent, but not his antics. They made some good changes, but they will not turn it around this year. Wait for Vegas, and be excited.

I think Philly is gonna be haunted by not signing Nick Foles. We can’t sit here and assume Carson Wentz health, or durability. If he goes down, this could be a very ugly year.

The Steelers had a great draft, and filled the hole that they had in Shazier. They lost arguably the best WR and RB in the same off season, which I am not sure has ever happened. Big Ben starts to go downhill, and Connor stagnates.

I am huge on D.K. Metalcalf. Body frame like Megatron and insane speed, Russell Wilson might have gotten the steal of the draft. They added to the defense line sans Frank Clark, I think that the Seahawks take another step towards returning to the dance.

Jimmy G, baby. Nick Bosa is an amazing talent and should see that defense take a step forward. Deebo Samuel and Jalen Hurd are gonna be big acquisitions for Jimmy to be 2019’s Comeback Player of the Year.

I. Do. Not. Believe. In. Jamies Winston. Devin Bush is a nice player and will do nice things, but this is a tank for Tua year if I have ever seen one. Boy, do I feel bad for Mike Evans. Tampa gets lucky at home against Carolina and Houston.

Sorry Titans fans. AJ Brown is an amazing pick up, but we will see if Mariota can keep this up. I think he falters in a year with contract pressure, instead of balling out like most do. Mariota will be a Titan past this year because they mutually respect and love each other, so don’t feel distressed by this.

I’m glad that Washington came last, because this is by far my biggest surprise. This team has the Rookie of the Year in my book, as Dwayne Haskins will make the most out of his opportunity with AP. Having a back like Chris Thompson who can catch the ball out of the backfield will be amazingly utilized much like that of the Patriots. Their defense is solid, and I think they make huge jumps here. They start 2-2, but win nine out of the last twelve.

View all posts by Calvin Kamrath