Literally millions of people have asked me:

Hey Mike, I see all these basic mock drafts and comparisons out here, where’s yours?

Well, look no further, here it is.

After scouting for an entire year, watching clips and breaking down shooting motions, I’ve come to my conclusion: This draft gets weird after the top 3.

If the top 3 teams hold true, the board is pretty much locked. If the Suns jump the Cavaliers for the 2 spot, congratulations to Ja Morant, you’re going a bit higher.

After that? Commence the dart throwing.

We got 22 year olds, we got kids listed at 6’5″ that look like 6’9″, we got old-school 4’s and new-school 2’s. So come on down and take your pick, this lottery is gonna change, so lock in your favorites early.

I have never in my life watched a player this closely for this long. From his sophomore year of high school, Zion’s been making noise. I couldn’t look away from my computer back then. I watch his junior year BallIsLife Mixtape at least once a month for fun (it’s better than his senior year with a more fire instrumental). I’ll never forget finding out about Marvin Bagley through him, as one night I was furiously researching to find who in the world was rated #1 in the Class of 18 to Zion’s #2.

Knicks fans, rejoice. This is the first key step in attracting those free agents you’ve been promised for years now.

Or just trade it for a year of AD, your choice… 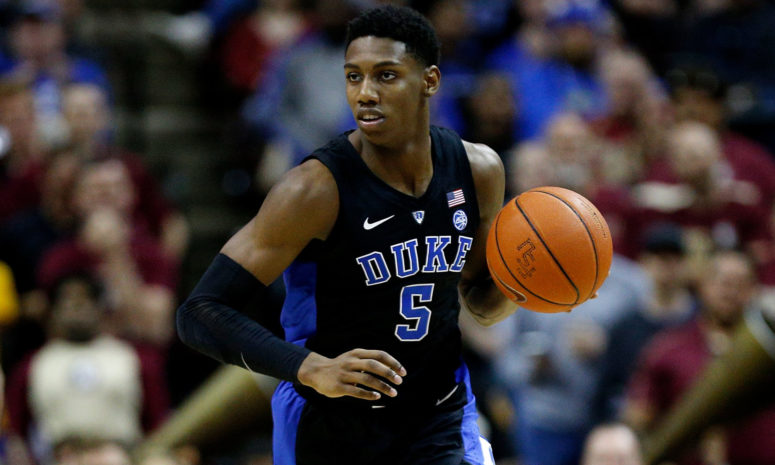 It gets tricky here.

Ja Morant has been #2 on my Big Board for most of the season. However, the Cavs already made their young PG pick last year with the Young Bull (someone tell Collin that’s a fire nickname, but wrong team for it). Add that to the fact that David Nwaba should not be playing starting minutes for any NBA team right now (sorry Dave, I still love you), and you have a perfect marriage between Barrett and Cleveland.

Barrett comes with his flaws. He tried his hardest to take over games when Zion wasn’t around, but often times at the expense of low shooting percentages. I’m still not sold on his jumper being legit, either. What he does bring is elite finishing in traffic, knowing angles and how to weave through defenses. Initially I saw potential from him as a point forward; he has some decent vision when he’s not locked into chuck mode. We’ll see what he can do as a likely #1 scoring option in Cleveland. 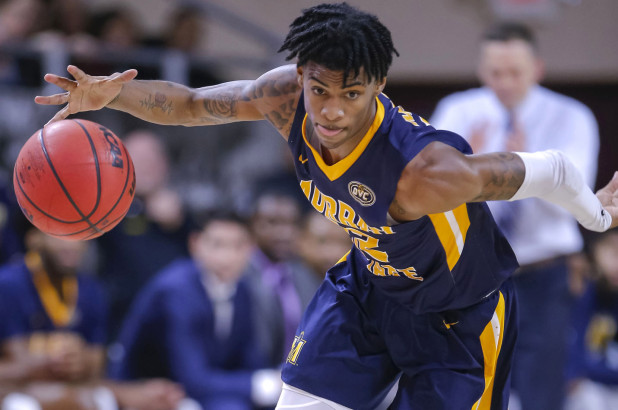 This seems to be the 2nd biggest no-brainer and best fit of the draft.

The Suns haven’t had a competent point guard since 2014, when they used to trot out 3 such floor generals a game in Dragic, Bledsoe and Isaiah Thomas (remember that? what a wild strategy). All 3 found greener pastures after leaving the desert, leaving Phoenix with a PG drought that has seen everyone from Tyler Ulis to Tyler Johnson (with a quick shout-out to the homie Isaiah “The Cannon” Canaan).

Morant would be an easy decision, a smooth offensive weapon that plays under control with fantastic vision. He’s not Westbrook, and he’s not Curry. But he’s definitely more than Tyler Johnson. Just imagine Chris Paul in Jrue Holiday’s body, minus some defense. That’s a pretty decent start.

Best Case Scenario: The Bulls jump into the top 3 and nab Morant

More Likely Scenario: They end up with a Swiss Army knife wing with range that can be developed beyond the 3-pt line.

Culver’s shot is a little too inconsistent for a SG, however, as one of the older lottery-level prospects, he does look polished in other areas, with great discipline defensively. Chicago would be more than happy to upgrade their wing depth, though I cold see them going the big man route if someone like Brandon Clarke or Jaxson Hayes blows them away in workouts. 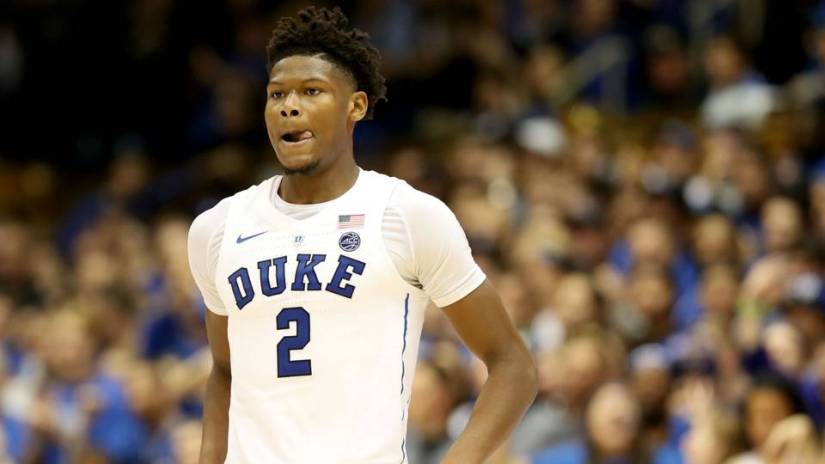 The Hawks will have their choice of either Hunter or Reddish at the cleanup spot, and honestly couldn’t go wrong either way. Both project as NBA-level snipers, and fit the covered “3 and D” mold that so many teams are looking for.

I give the edge to Reddish here for now, as he is almost 2 years younger and will be joining a team with time to wait. His motor is his biggest red flag, but I feel like that can be ironed out in draft interviews, and is likely a byproduct of having to pretend to go to class for 6 months before he could make millions of dollars. His inconsistent shooting at Duke is also a concern, but I believe it to be an anomaly, and like I said: even though they look ahead of schedule, the Hawks have time to wait. 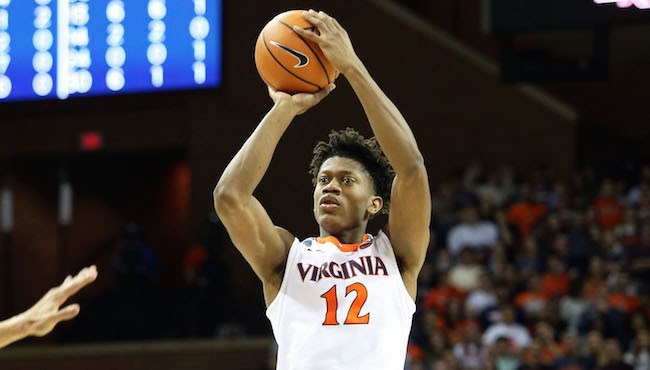 Ahhh, what to do with the Wizards…

On one hand, their starting SG is coming off the best season of his still young career. Bradley Beal took his game and intensity to another level this past year, and at all times seemed genuinely pissed about being stuck on a team with a trajectory that’s starting to line up with Charlotte and Miami.

Hunter is by far the best option for the Wiz, though I could see them going the Brandon Clarke route if they decide not to pick up Jabari Parker’s team option (likely). After trading away Kelly Oubre for an older version of Kelly Oubre (hi Trevor), DC could use a young wing loaded with energy and potential. Bred in Tony Bennett’s defense oriented system, Hunter is a wing that can shoot, but efficiently. He won’t command as any touches a game like Reddish might, and that’s just fine for Washington.

When you overpay a mid-tier PG, you better get him touches to prove himself.

I don’t know what it is with these Texas centers, but they all love blocking shots.

The Pels are gonna need a center heading into the offseason. As much as they seem to love Alexis Ajinca and Cheick Diallo, they should run with the next Jarrett Allen instead. Hayes has flashed some 3 point range, and has the same elite timing and length to bother shots that made Mohamed Bamba and Myles Turner high draft choices in years past. 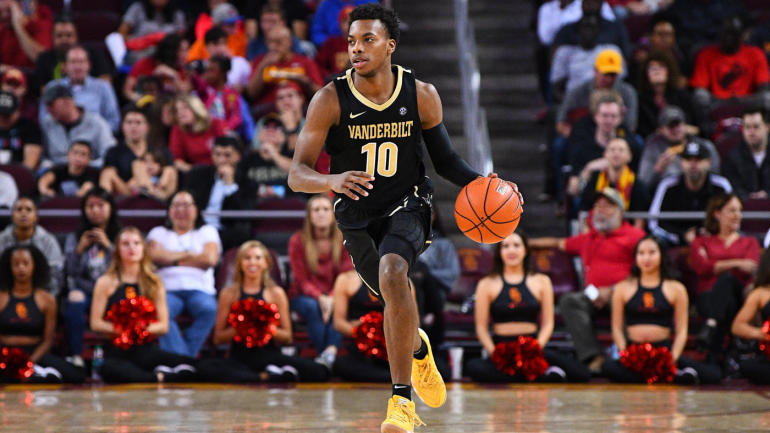 Might be too high, but I think the Nashville product is gonna kill in workouts. Memphis will be more than happy to snag what I believe is the PG2 of this draft, especially if his surgically-repaired meniscus doesn’t show up in his game or medicals.

At the start of the season, Garland was bordering on a top 3 pick. Some of that was due to people not knowing who the hell Ja Morant was, but most of it was based off of his hype and pedigree coming out of high school. Give him a full season, and we could’ve seen a drastically different Vandy team.

Probably my favorite player in the draft, Fernando should rise on draft boards for his effort and sheer size. Able to catch lobs and flash some post moves, with a body that screams boxout, a frontcourt of John Collins + Bruno could terrorize opponents for years to come. Atlanta might take a backup guard here, but with basically two picks in the top half of the lottery, they need to make their tank count. 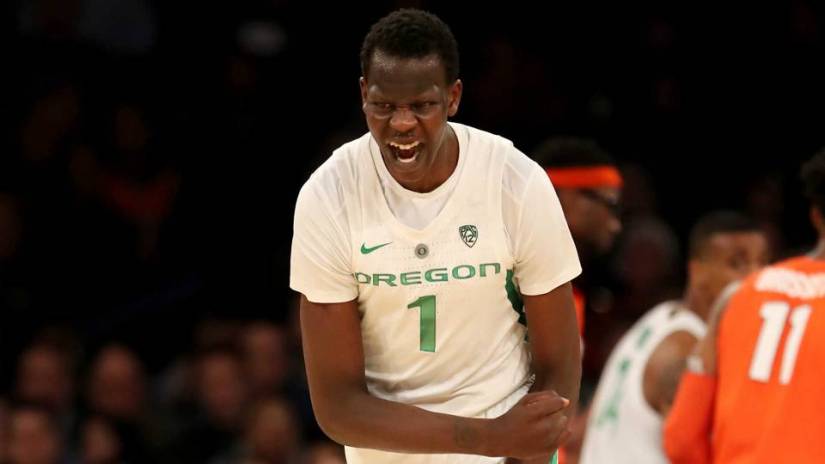 Possibly the most intriguing player in the draft, Bol gives the Wolves a unique big with ridiculous length and floor stretching, while allowing KAT to stay at his natural PF position. A season ending foot injury kept him from playing a majority of the season, but through 9 games he looked as impressive as anyone.

Questions about his strength and mobility will come into play, but there’s not many players with 7’6″ wingspans averaging 21/11/3 blocks per 36 while connecting on 50% of his triples.

L.A. should be thrilled if Brandon Clarke is still here.

Clarke was one of the most productive players in the nation averaging 21/11/2, with 4 blocks and a steal and a half per 36 this year for the Zags. Draft age might scare away some of the higher lottery teams, and we all know the Lakers are gonna pick whoever LeBron tells hem to, but Clarke would be a great addition to a team starving for young bigs.

And before you say anything, no. LeBron doesn’t need 4 shooters to space the floor. That’s been overplayed more than his ability to guard 5 positions. The Lakers just need talent, and that’s what Clarke brings at an NBA-ready level.

Though it might kill some Celtics fans to draft a guy with that first name, Boston needs to hedge it’s bets in case Kyrie doesn’t resign or Terry Rozier gets an offer sheet they can’t handle. Both are likely. White was steady for a freshman this year, and projects as a Collin Sexton type with similar hair and better decision making. Look for more roster moves to be made in Boston’s offseason, but this kid seems like a safe choice moving forward.

An offensive weapon at a strong 6’8″ 225, Rui decided to come back for one more year at Gonzaga as a projected 1st round pick last year. It paid off, as the Japanese slasher put up solid if not fantastic numbers in his third go around in Spokane. Miami has been experimental with it’s bigs, trying to find the right situations to run their young talent at the same time (point guard Justise Winslow, anyone?). Hachimura should give the Heat another weapon on the offensive end, and if he ever develops a shot could be another young piece on a roster with weird age balance already.

It’s time to pack it in, Buzz City. Time to let go of all your aging assets. Time to let Kemba Walker be free to roam the wild plains of free agency. Time to draft a young wing that is basically a blank slate with 3 point range and a frame that could put on plenty of muscle. Don’t be surprised if Doumbouya becomes another draft board riser in workouts; not much is known about him from playing overseas in limited minutes. But any 18 year old already flashing 3 and D potential is worth a shot this late in the lottery.

View all posts by Mike Price